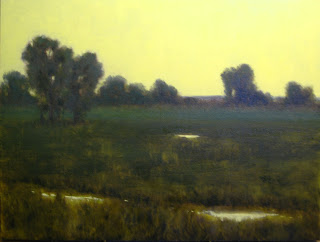 I've been reading the James Breslin biography of Rothko. I am not sure why I bought it in the first place, but it prompted me to also reread some of my other books about art and artists from that era, and to rethink Rothko. I vividly remember the first day of my first college art history class in 1967 (I was 17 -yikes!). Clement Greenberg was on the reading list and I have had a serious bone to pick with him and just about everyone that followed down that path for the next 30 years. It seemed to me that everything about art that was beautiful, transcendent and lyrical died or at least went on life support during that time. You can definitely put me in "the emperor has no clothes" column when it comes to much of what is called modern or post modern art. I am fully aware this (in much of the art world's opinion) makes me tragically unhip, provincial, narrow ,etc- and I'm OK with that.

However, I also remember the first time I saw a Rothko painting in the Museum of Modern Art in about 1969. I was stopped dead in my tracks. It was big yet quiet, bold yet meditative. And the color seemed to just envelope you. Big surprise to me, I was really moved by it. So, the biography and my collateral reading put some things in context that I had not really grasped at the tender age of 17. By the time I entered college, Rothko and his crowd, had been supplanted by "the next big thing" - Pop Art- and that Pop had swept away not only abstraction, but a rebirth of representational work by artists like Fairfield Porter (also a thoughtful critic and at odds with Greenberg) , Jane Freilicher, Larry Rivers, Nell Blaine and others. So all these years I really should have been pissed at Andy Warhol instead of Jackson Pollock!!??!

But to be honest, I was always willing to grant a dispensation to Rothko. Now, from a distance of many years and seeing how my own work has developed over that time, its not so hard to see why. If Rothko himself is to be believed - and he was often contradictory or in later years, silent about his art- he thought that the purpose of art was to transcend, to transport, to access the best part of our humanity. His paintings are beautiful - full of lush, transparent color, creating indeterminate spaces (fields) that invite us in . They mirror the story of his life, our lives, the human condition-love, loss, courage in the face of despair. He wore his heart on his sleeve, or at least on his canvasses. These paintings are the very antithesis of the formalism of early abstraction or the commercial, hip, smug, snarky, or souless stuff that came next. I think Rothko is perhaps the only abstractionist who was able to make his paintings of nothing truly about something, taking them beyond the merely decorative- which is why viewers respond so strongly to them.

"I'm interested only in expressing basic human emotions—tragedy, ecstasy, doom. If you . . . are moved only by . . . color relationships, then you miss the point."
Mark Rothko

Casey Klahn over at The Colorist posted a video about Rothko's work that I think is particularly moving. Since I can't figure out how to post it here, I'll send you there to see it.
Posted by Deborah Paris at Friday, July 25, 2008

Thanks Deborah for writing this. It is eloquent and inspiring, as are your paintings.

Thank you Peggy and congratulations on your new blog!

I agree with Peggy. Deborah,
thanks for your kind words on my blog about my boat painting. It always makes me feel good to hear nice comments from someone of your caliber. Your work looks like art history/museum quality as usual. All my best to you,
Todd Bonita

I had to laugh at the "snarky" word. How apropos. The Modernist movement does really offend people in general and many times on purpose.

I hope we're in a day and age where one movement doesn't have to supplant the other. At the art fair this weekend, I participated in a big, ecclectic exhibition of art. Abstraction laid down with realist, as the lion will with the lamb.

Hi Deborah,
very nice post about Rothko.
I just wanted to let you know that I awarded you the "Arte y Pico" award for your exceptional landscape painting!
Warm regards, Petra

Thank you very much Todd.

Hi Casey. I hope you are right, but it seems art history would suggest other wise. Glad your show went well this weekend!

Wow, thanks Petra! And I really enjoyed looking at the photography on your blog.

Beautiful. These are the kind of landscapes I wish I could paint.

Wow, Jeff, thank you. I am a fan of your work too!

Deborah, This is one of the most inspiring posts I've read in a while. I, too, was a college student in the 60's and got thoroughly dosed with the whole works you talk about. Thanks for all you've said here. I know New York is still stuck in the trends attitude, but I'm thankful I've lived long enough to see responsive art wake up and flourish.

Hi Dianne.I truly believe we are in the midst of a renaissance in representational painting- and we lived to tell about it! Thanks for visiting!

Hi Deborah! Your beautiful painting seems to have been overshadowed by your very interesting comments on modernism. Like you I like to be able to recognise a "philosphy" almost beneath the squiggles and turns of paint. (eg, Rothko, yes, but also people like Paul Nash and Kandinsky and many more - I am not as clued up in art history as you are, so forgive me for jumping around). The feeling that someone has something to say and is not just pulling a trick out of the bag, I think that is it for me. By the way did you know that Rothko's son Christopher and daughter Kate have published a book written by Rothko during his lifetime(in very rough, draft form but fascinating) called "The Artist's Reality: Philosophies of Art" ? It was published by Yale University Press in 2004.

Hi Deborah, I love your paintings, wonderful landscapes. They all have such a great feel to them. I'm trying to get there. I'll visit again

Hi Sheila. Yes, I do know about that book and have read some excepts from it. Its on my wish list! Thanks for visiting!

Hi Barbara. Thank you for your kind words about my work. Thanks for stopping by!

All the painting is well achieved, but what I most like is how the lighting convincingly (sp?) depicts the time of the day.

Hi Deborah,
I had exactly the same experience in several museums when suddenly I was riveted my Rothko. I too am rooted in realism but I do find some abstract painters wonderful, as you expressed so eloquently. I do enjoy seeing your work whenever I come across it!

Incidently, speaking of landscape painting I spent some marvelous time making paintings at your beautiful home in Dade City, when Tampa Bay Plein Air came to paint there. Since I live in Zephyrhills it was easy for me to come several times. Both those paintings were sold!

I just wanted to say that I have subscribed to yours and Linda's blogs and look forward to reading them both. I am sure I will learn much from their content, a well as enjoying the artwork.

Hi Jose. I appreciate your comment-it really is about evoking that time of day for me. Thanks for visiting.

Hi Gainor. Small world, huh?! I'm glad you enjoyed painting at our place-we do miss it from time to time. Thanks very much for visiting!