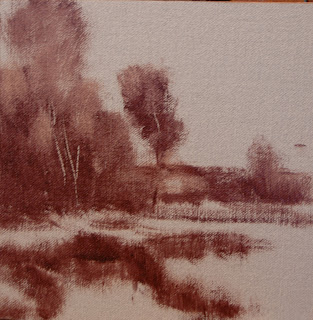 Over the last couple of months I have gotten several emails asking questions about various aspects of my painting process. Since I don't have a small painting to post today, I thought it might be a good time to write about that... if anyone happens to be interested. First, I should say that my painting process has changed pretty radically over the last year, so what I say here isn't something I've been doing a long while or am even sure is the way I should be doing it. Previously and for many years , I worked in a fairly direct way- not exactly alla prima (except outdoors) but definitely direct. Now, I am painting in a more indirect method which involves using layers of paint - and more passages of transparent paint. So here is a typical lay in using a color made by Vasari called Shale. It is the workhorse dark on my palette- I like it because its transparent and has a warm violet undertone. I used to thin my paint with OMS for this stage, but now I often use an almost dry brush technique to put this first layer down because it will show through in portions of the finished painting. This is also why I like a linen with a little bit of texture so that I can also use that texture to describe elements of the landscape, like here, where the texture of the canvas and the drybrush help describe the field. I also use a rag to wipe out lights and a palette knife to scrape out finer lights. 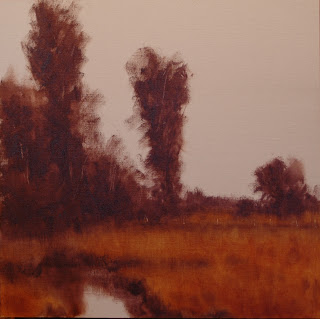 Here is the next stage of the painting where more transparent layers have been added to the trees and also the field. When you are planning to use layers of glazes you have to be very careful not to get things too dark too quickly. Unlike a more direct method - where you can always adjust the value of a shape with another coat of opaque paint- if you want to keep that area transparent, you have to get it exactly right from the start (which is always a good idea anyway!). In addition, because successive glazes will darken the glazed area, you have to start a bit lighter than you plan to end up. I will also use a scumble occasionally( a thinned translucent layer of paint, usually containing white or some other light opaque mixture) to lighten an area, or to soften edges and create atmosphere. I use Liquin as a medium. I also use it between layers to "oil out" the painting- that is to bring the colors and values back to their original state so another layer can be accurately judged against what has already been laid down. Here, the opaque portions of the painting, the water and sky, haven't been laid in yet but the light value of the canvas "stands in" for that value. Using transparent paint in the darks and opaque paint in the lights is pretty standard procedure, but I like to mix it up sometimes, using mostly transparent paint for the entire piece like here or transparent paint in some of the lights, like here. 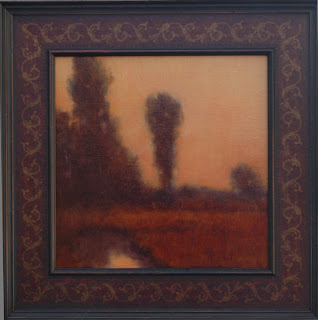 Here is the finished painting. The sky and water have been added with opaque paint (Naples yellow and Gamblin Brown Pink + a touch of white) and then glazed over with several transparent layers. More layers have been added to the trees and ground plane, creating what I hope is a rich color harmony. This painting is available at Ernest Fuller Fine Art in Denver, Colorado.
Posted by Deborah Paris at Wednesday, January 30, 2008 8 comments: 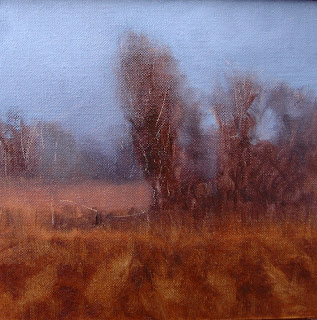 Winter Greys #3 oil 6 x 6
$100 + $10 shipping
This week we had freezing rain followed by freezing fog. I have to admit, that's a new one to me! I do love the color harmonies it produces in the landscape - and the utter bareness of the trees and the muffled quality of both color and sound. Its such a lovely contrast to the sensual melancholy of fall and the lush exuberance of spring.
Posted by Deborah Paris at Sunday, January 27, 2008 4 comments:

Email ThisBlogThis!Share to TwitterShare to FacebookShare to Pinterest
Labels: a painting a day, fog, winter

This morning a nice surprise in my inbox- an email from Dan at EmptyEasel letting me know that my work is being featured today here. So, click on over and read it!
Posted by Deborah Paris at Wednesday, January 23, 2008 2 comments: 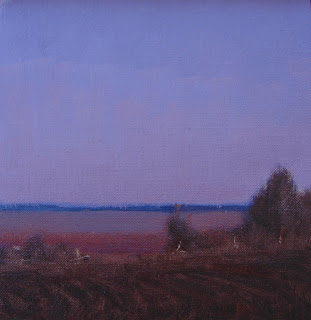 Panhandle Evening Oil 6 x 6
Sold
This is a study for a larger piece for the Panhandle Plains Museum Invitational. This is my third year in this show. The Museum is located in Canyon, Texas (near Amarillo). In addition to the museum, one of Canyon's claims to fame art-wise is that it was the place that Georgia O'Keeffe taught for several years and where she first started doing the work which would lead to her status as an icon of modernism. The other is Palo Duro Canyon a 120 mile canyon with a spectacular landscape and history of human habitation for the last 12,000 years.

The Museum is an amazing place. It is filled with exhibits and collections relating to all facets of the area- history, archeology, geology, art and culture . You could happily spend days wandering around from exhibit to exhibit. The Invitational is an annual exhibition and sale which features artists from all over the southwest. As I have mentioned here before, I have a special place in my heart for the Panhandle. I love its stripped down, spare beauty and its people are warm, hard working, delightful folks. So, its a treat and a privilege to be included in this show.
Posted by Deborah Paris at Saturday, January 19, 2008 9 comments: 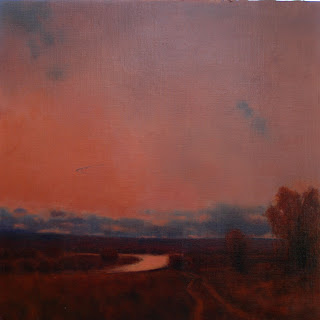 This painting is a larger version of one I posted a while back. I have been obsessing about whether this is finished for a week or so now. I think it is now, but maybe not. It is supposed to go to the Panhandle Plains Museum Invitational next month along with two other pieces. And of course, I can't seem to get a good shot of it either- this one had the least glare but still isn't right. The birds in the sky are pretty much impossible to see because of it, but if you enlarge the image you can see them (and understand the title!) There are several layers of glazes and liquin on it at this point and it becomes harder and harder to find an angle that will work- should be interesting to see how they hang it.....
Posted by Deborah Paris at Sunday, January 13, 2008 7 comments: 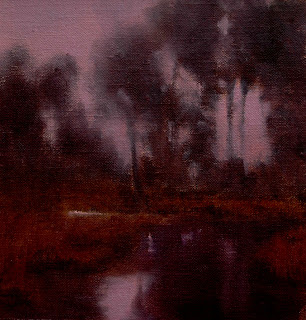 Scatter Creek Dusk Oil 6 x 6
$100 + $10 shipping
Sold
Lately the eastern sky has turned the most beautiful shade of pinky mauvey grey right at dusk. I tend to be looking west at that time of day and its always such a nice surprise to turn around and see something equally as beautiful in a whole different color harmony.
Posted by Deborah Paris at Tuesday, January 08, 2008 8 comments: 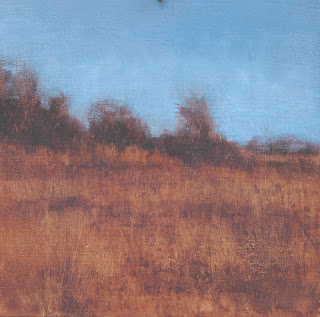 Winter Field- A Bluebird Day # 2 Oil 6 x 6
$100 + $10 shipping
Its hard to believe that two days ago I was painting in my studio wearing a jacket, fingerless gloves and ear muffs with the little electric heater going full blast! But today, well...it was just another bluebird day.
Posted by Deborah Paris at Saturday, January 05, 2008 2 comments: 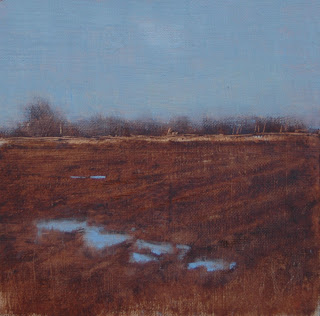 Winter Field- A Bluebird Day Oil 6 x 6
$100 + $10 shipping
Sunday afternoon my husband and I took a ride. It was what he calls a bluebird day- meaning a winter day with blue skies and mild temperatures. The bright blue sky reflecting in the puddles in this field just made my day.
Posted by Deborah Paris at Wednesday, January 02, 2008 4 comments: