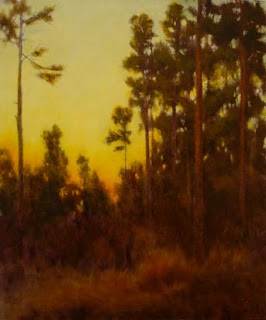 In the Pines
24 x 20
Available at M Gallery of Fine Art
This is another painting for my solo show at M Gallery of Fine Art in Sarasota, Fl opening February 5. At first glance, it may seem an odd subject for a show featuring Florida landscapes. But, Florida is (or was) home to some of the largest stands of pines in the South, and they loom large in some very particular memories from my childhood growing up there. As I've written before here, when I was a little girl, my passion was horses (and drawing horses). In the afternoons after school and on Saturdays, I'd ride out on my horse into woods filled with pines and blackjack oaks. At dusk, riding back to the barn, I'd watch the light flickering through the trees and the warm glow at the bottom of the sky.

Morning on the Flats 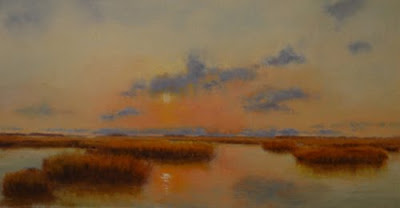 Morning on the Flats
16 x 30
Available at M Gallery of Fine Art
All up and down the west coast of Florida, there are bays, inlets, and saltwater flats- the skinny (shallow) water where the best fishing can be found. For years, my dad and my husband Steve would meet in Cedar Key or Homosassa in the hours before dawn to head out into the Gulf to fish. My dad, born and raised in Florida, had been a bass fisherman all his life, and had never spent much time on open saltwater (unless you count that little trip from England to Normandy in 1944). It was a new challenge and one he readily embraced in that last decade of his life. So, I was thinking of them, out there on the flats at dawn, when I painted this.

Who Will Paint Florida? 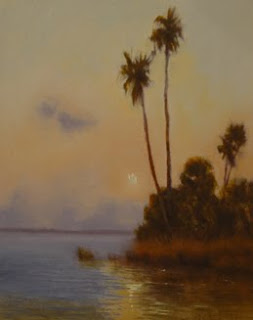 Hazy Morning
20 x 16
Available at M Gallery of Fine Art, Sarasota
As I've been preparing for this show I've been rereading a couple of books I have on Martin Johnson Heade. Heade was one of those very underrated 19th century American artists who had always been loosely associated with the Hudson River School. New scholarship in the last 40 years has rescued him from obscurity, and placed him within the Luminist school. Today his star is rising. Unlike many of his contemporaries, he wasn't particularly famous during his lifetime, so discoveries of Heade's in thrift shops and attics has been a common and profitable occurrence over the last few years.

A number of well known 19th century artists visited and painted Florida -Inness, Homer and Sargent to name a few. But, Heade was the only one who made a permanent home there. He lived in St. Augustine for the last two decades of his life and painted exquisite marsh scenes as well as still lifes of tropical plants and birds, particularly hummingbirds. Its important to remember that when Heade came to Florida in the 1880's it was the last frontier left in the east. The extension of the railroad into Florida facilitated its growth and the presence of patrons interested in collecting landscapes depicting its tropical beauty.

When Heade came to Florida it was not only a tropical frontier but virgin territory artistically as well. There were no artistic traditions or schools upon which to draw. Heade's voluminous output during these two decades was not only unique but the first aesthetic exploration of Florida motifs, from landscape to flora and fauna. Although there are many who paint Florida today, Heade was the first to answer the call. 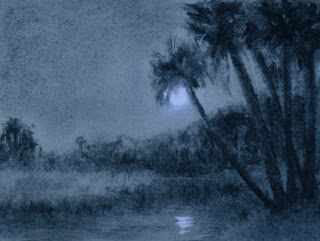 I made this drawing as a study for a painting for my solo show at M Gallery of Fine Art in Sarasota next month. My husband says its hokey- well actually, I asked him if he thought it was, and he said yes. Note to self: don't ask questions you don't want the answer to. I prefer to think its romantic.

The trouble is that images of Florida can seem trite even though they are of real places that actually exist (like this one). There is a sort of image overload out there that can't sort out what's real, photography, fine art, or a plastic place mat at the diner. But, of course, there are people out there that think the landscape itself is trite, and how sad is that?

I was born and raised in Florida. I am intimately acquainted with both her real beauty as well as the cheap dime store lipstick and plastic alligator version. I just hope I can do her justice.
Posted by Deborah Paris at Thursday, January 14, 2010 13 comments:

Road Through the Pines 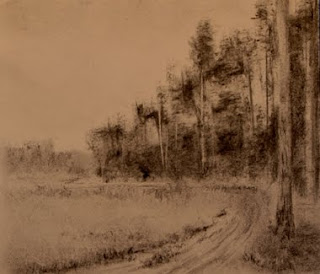 I've been working away on the paintings for my solo show next month at M Gallery in Sarasota. But, I'm still finding time to continue this series of drawings.

I've also added a new class- The Painted Sky- to my offerings of online classes this spring. Its all about learning to paint beautiful, atmospheric skies. More information about this class can be found here.
Posted by Deborah Paris at Wednesday, January 06, 2010 9 comments: 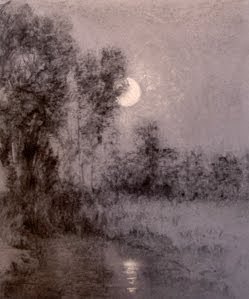 Blue Moon - 11 x 9
Vine charcoal and white conte on Twinrocker handmade paper
Available at Deborah Paris Fine Art
The full moon - the blue moon- was incredibly bright this week- lighting up the night and making for some wonderful moonlit landscapes. This drawing was made on one of several new papers I received from Twinrocker last week. I've been doing a little research on laid papers which were used by late 18th and early 19th century artists like J.M.W. Turner and Thomas Girtin. Both Turner and Gertin used a blue laid paper similar, I think, to this one. This one is called Cornflower Blue and is actually bluer than it appears on the screen. I'm getting great pleasure from experimenting with these different surfaces.

I've only a couple of spots left in the Drawing & Painting Trees online class starting in February. I've also scheduled a new Painting the Luminous Landscape online class which begins March 26, and a brand new class called The Painted Sky. Information and registration for all classes is here.

My very best wishes to all for a Happy New Year!