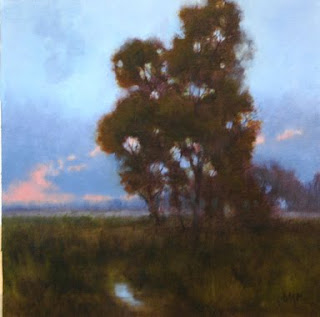 I took this image using a tripod but it looks like a Halloween poltergeist got into my studio and was shaking the camera. Really, I don't know why its so blurry! The bad news is I didn't get around to checking it until after the piece had left the studio. Lesson learned.

As of this morning I have one spot left in the online Luminous Landscape class for January. Information and registration here Update :Class is now full. Email me if you would like to be notified about upcoming classes. 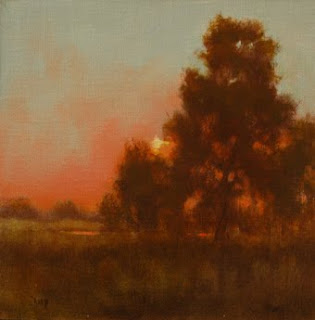 Remains of the Day
10 x 10
This painting and a half dozen others are on their way across the Big Pond to the Christmas show at Blackheath Gallery in London. The show opens November 7.

I am very pleased to say that I am now represented by Galerie Kornye in Dallas and Galerie Kornye West in Ft. Worth. I'll have work in the Holiday open house at the Dallas gallery on November 19 and the Miniatures Show in Ft. Worth which opens December 4. 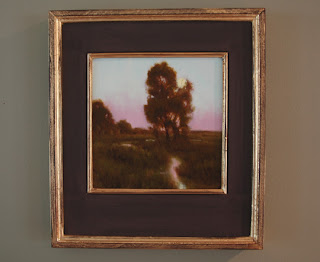 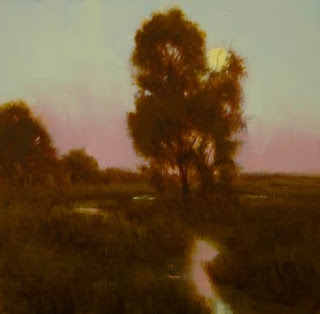 Twilight Moon
10 x 10
I just finished teaching the last week of the Magic Hours online class. One of the things I tell students wanting to learn about the Tonalist aesthetic is that mood is an important component of this painting style. And although it might seem difficult to quantify or analyze the elusive concept of mood, it can be translated into the language of painting. Very close values and tightly focused color harmonies are what I call "the mood makers". 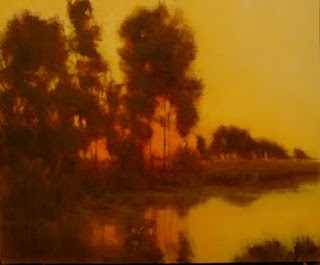 Evening Pool
10 x 12
Sold
This is one of the three smaller pieces I am exhibiting at the Albuquerque Museum Miniatures & More show. The gala opening is on October 24 and I am looking forward to a road trip over to New Mexico. I'll spend a few extra days in Santa Fe after the show.

Shortly after I started this blog over two years ago now, I did a series of small paintings called Rick's Pool. As I explained back then, the word "pool" is used in northeast Texas to describe a pond, which is mostly used to water livestock but often serves as a fishing hole as well. They are a constant source of inspiration for my work.
Posted by Deborah Paris at Saturday, October 10, 2009 3 comments: 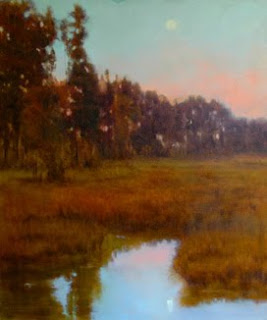 We had a spectacular early moonrise this evening ahead of Sunday's Harvest Moon. As a confirmed moon watcher, I'm looking forward to a weekend of moon gazing. Moon set should be terrific too. Must. Get. Up..for that!