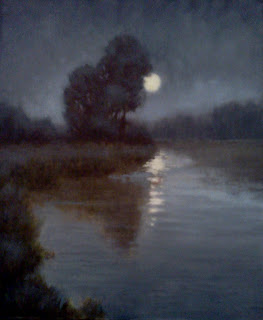 Another small painting for the Autumn Exhibition at Blackheath Gallery, London. Click on the image for a larger view. The limited palette and close values necessary to paint nocturnes are surefire "mood makers".

I was thinking about this poem by Mary Oliver as I painted this piece.

Moon and Water
by Mary Oliver

but the moon
She listens
to my complaints
like the good

companion she is
and comforts me surely
with her light.
But she, like everyone,

has her own life.
So finally I understand
that she has turned away,
is no longer listening.

She wants me
to refold myself
into my own life.
And, bending close,

as we all dream doing,
she rows with her white arms
through the dark water
which she adores

The 30-3-3 Rule is something that was recently attributed to Michael Workman- an artist whose work I admire-but I've also heard variations of it over the years attributed to many different sources. It goes something like this: From 30 feet a painting should catch your attention and draw you across the room; from 3 feet it should show the artist's intentions, the concept, the story; and from 3 inches it should be visually interesting to look at. This seems to me to be a worthy goal to aim for in my own work.

I finally had time to tinker with the images of Summer Aspens to get something that is much closer to the original. Here it is with some details. 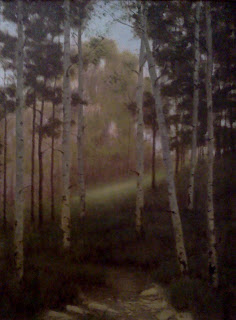 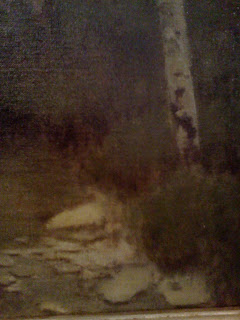 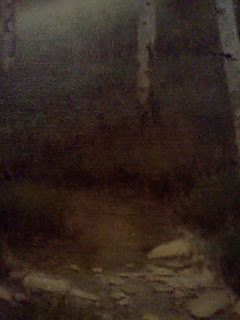 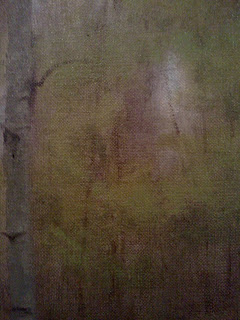 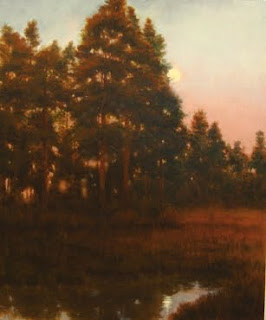 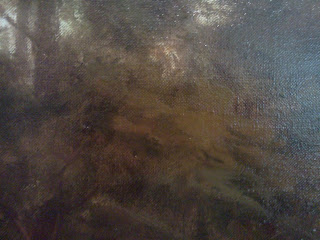 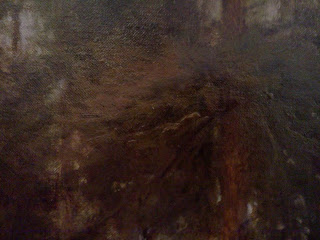 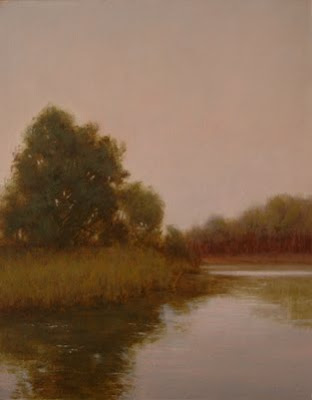 Evening Stillness
14 x 11
I am a word person. Or, at least, I am told that. I do love words and finding ways to use them. That influences my work. There is a notion out there that visual ideas and other kinds of ideas are two separate things and that when deciding on your concept or idea for your painting, you should think only in terms of visual ideas. But, our brains don't work that way. Everything we think and see comes together to form the sensations and thoughts we have. So, why should we try to paint that way? Why deny the rich and layered meaning of words and pictures? 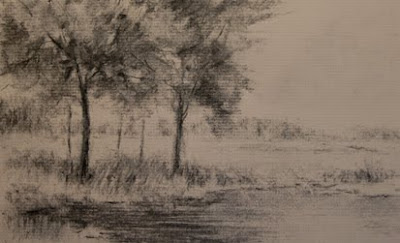 Although I am working on six paintings in the studio for an upcoming show at Blackheath Gallery in London, I am also taking time to do some drawing. This is always a good way for me to unwind when I come off an intense period in the studio, or in this case, at the show in Telluride. Vine charcoal and toned paper is a favorite drawing medium.

I still have a few spots left in one of my most popular online classes- Drawing & Painting Trees, which starts next month. You can click here for information and registration. Wondering if an online class might be right for you? Be sure to check out student comments here. 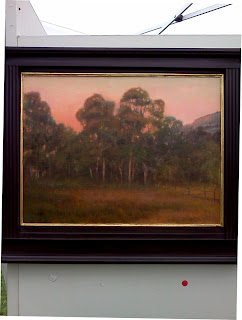 I am back home and taking a day or two to decompress before getting back to the studio. The long drive home gave me plenty of time to mull over the events of the last 10 days. One of the things I love about doing this show is that it gives me the opportunity to talk directly with potential buyers. I have learned over the years that listening to them can provide very valuable feedback.

Here are a few things always make an impression on me:

~ Go Where the Collectors Are- this show works because it is held in a "destination" venue which attracts affluent visitors and second home owners.

~Listen For the Buyer's Reaction to the Work- current thinking about "permission marketing" encourages us to tell potential buyers "stories" about ourselves and the work. What I have found is that if someone approaches my work with obvious interest (oohhs and ahhs and pointing are always good indications) then they already have a "story" in their head about the painting. It is my job to find out what that is and support it by what I say, not tell them my story (unless they ask for it).


All of these (and more!) are things I discuss in my little book Studio & Business Practices for Successful Artists. 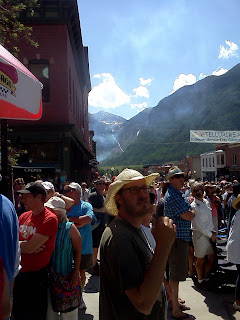 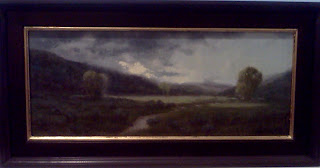 Just a quick post as I am running out to the public sale this morning. Last year, I struggled to get that "big view", so I decided to give it another shot this year. The idea for this painting is a clearing sky after a quick afternoon thunderstorm, a regular summer occurrence here. But, of course, this piece is much influenced by my love of the Hudson River School painters. 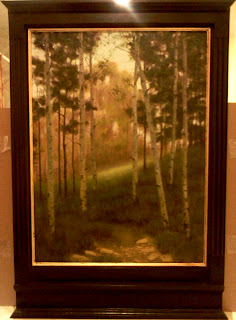 Well, I've talked about it all week and here it is. Ta Da! At the risk of repeating myself, this image really does not do it justice. The lit up area behind the trees is warmer and the aspens behind that are delicate hues of mauves and greens. But, this is the best I could do.

We turned our auction pieces in tonight (this is mine) and I have to say, I was impressed with the caliber of the work. The silent auction is tomorrow night and then the public sale starts on Sunday.

Email ThisBlogThis!Share to TwitterShare to FacebookShare to Pinterest
Labels: aspens, Telluride, Telluride Plein Air Festival
A brief break from Telluride news to say that my painting Spring Stream is included in the Recent Paintings section of the summer issue of American Painting Video Magazine! You can see the painting in the header for the blog and I also wrote about it here .
Posted by Deborah Paris at Friday, July 01, 2011 No comments: