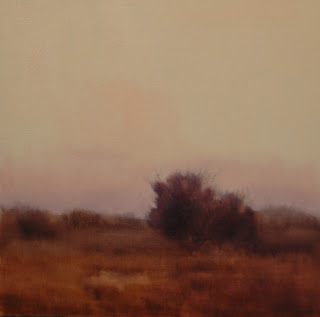 This weekend Steve (my husband) started framing up the walls for the new storage area in my studio. There never seems to be enough storage in a studio and I'm sure I'll fill this one up immediately. There is one very special feature to this storage area, however- The Constable Closet.

A few months ago Steve and I were talking about John Constable and his famous "six footers" - the large exhibition pieces he painted for the annual Royal Academy shows. In many respects these huge canvasses had an extremely beneficial effect on his career and brought him to the attention of landscape painters and collectors in France (even as he was somewhat ignored in England) . About the same time as this conversation, my dealer in Chicago started encouraging me to paint some really large pieces and Steve enthusiastically supported that idea. Ever since then, he asks me on a regular basis when I'll be starting my first "six footer".

I've had a few mishaps over the last few months, with large panels getting dinged while sitting around in the studio. So, this weekend when we started working out the design for the storage area, he came up with the idea to include an area where I can store big panels. And The Constable Closet, named after the great man himself, was born. 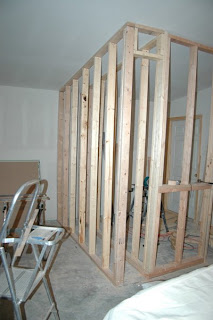 Its a bit tough to see (it sort of looks like a forest of 2 x 4s at the moment), but the tall narrow opening on the left front is the opening for the Constable Closet. It will be dry walled in the interior and have a funky little narrow door. I'll be able to store panels up to about 7' x 7' in there. The opening for the rest of the storage area is around to the right (the shelves will back up to the right wall of the Constable Closet. There, I'll have some vertical storage for smaller panels and paintings and shelves for supplies.

I've read that Constable often let his children play in his studio and that on one occasion one of his sons punctured a large canvas with the mast of a toy sailing ship. I just bet John would have loved this closet.

I'm envious of your storage capacities!

I love it when a plan comes together!
I keep on at Meridee to paint some bigger stuff, which she is now doing.
Not quite up to 6' though.
You'll have to get a set of rollers to paint with!

I love this painting. It is so peaceful, I can just feel myself relax as I look at it.

I tagged you for the "A Passion for Painting Award" because you are one of my favorite artists. If you want to do anything with it, the details are on my blog.

I would love to see the originals, as I'm sure reproductions inevitably can't convey the kind of subtlety and luminosity that makes these paintings breathe. But even on the screen they are lovely.

I'm with your husband and gallery--make some big ones! I think of Mark Rothko's large abstract color fields and how they create environments that envelop the viewer. It seems that what you're doing is similar in many ways to Rothko: creating luminous, poetic vibrations of color and tone.

Thank you Sara- and thanks very much for the award. I am barely holding on by my fingernails here so I don't thin I can play, but I do appreciate it!

Hi Don-thank you so much. I am always happy to hear my work and Rothko mentioned in the same sentence!