What Was Lost Is Found

Several weeks ago I posted images of two small paintings that were headed off to Atlanta to Huff Harrington Fine Art. These paintings had some special significance to me because they depicted the western edge of our property line and also because my husband had created some beautiful little tabernacle frames for them. It was a successful collaboration. 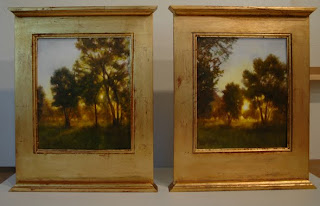 And the gallery had already had some interest in them based on the images I had sent them. So, it was a complete kick in the gut when I received a call from the gallery saying they had received this: 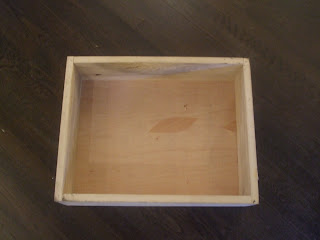 How an empty half of a crate could be delivered by Fed Ex was beyond everyone's comprehension. I was devastated. The idea that they were just gone was hard to accept.

My local Fed Ex ship center, a small office supply business here in Clarksville, is luckily owned by my friend Laurie who was determined to find the lost paintings. I was not optimistic, based on other dealings I have had with Fed Ex. A trace was put on the paintings, but Fed Ex was more interested in trying to get us to accept a $100 check than looking for the paintings. Laurie persevered, getting her sales rep involved. Today, the paintings were found! They were still wrapped in bubble wrap so we have our fingers crossed that they are in good shape. Soon, I hope they will be headed back to Atlanta.

Update: The paintings were found in Salt Lake City! I have not been able to confirm their condition but they are in transit to Atlanta and should arrive there on 10/14.

Gosh! That is amazing that they found them!

What an amazing story! there is something extra special about those paintings as they have been lost and now found! ...Plus your personal connection with them in the first place. You must keep us updated with what happened to them and if they are still in good order.... super frames, by the way. I saw them first time around, but didn't comment.

What a carry on! and how strange to deliver a half empty crate! the main thing is that the paintings have been found. I just loved those paintings! I would try and look into what really happened Deborah it looks to me like someone was either trying to get inside that crate or else the crate came open during transit. Once you know you will rest assured that future paintings will be safe during transit.

Since my cardboard safeboxes are hinged lids, and then taped shut, I am not used to the crate system. Was it closed with nails or some other fasteners? Bizarre.

I now feel luckier that my neighbor is a FedEx supervisor.

I love these adventurous paintings, also, Deborah! An interesting destiny is theirs.

These are so absolutely beautiful - I can understand why the gallery wanted them, and why you were devastated when they were missing. I like what Susan said. Now they have a story, a mythos that begins once they are out of the painter's hands. (We can say this happily, since they were found.)

I've never had a problem with UPS, and they let you insure for more than $100!
So glad they got found though.
It's got to be every artist's nightmare in the back of their head every time stuff gets shipped!
Lovely paintings, and great frames too of course!