I continue to read A History of American Tonalism by David Cleveland. I have found the sections on Tonalist etchings very interesting. There was a revival of interest in etching and printmaking in general in the late 19th century. Whistler's influence looms large in this and many of the better known etchers from that period were in Venice at the same time or later influenced by him. His haunting nocturnes of Venice inspired many others to take up Venetian subjects as well as harbor scenes. In fact Cleveland states that "The Tonalist etching was virtually born in the cold winter of 1881-82 as Whistler produced his first and second Venice sets...". 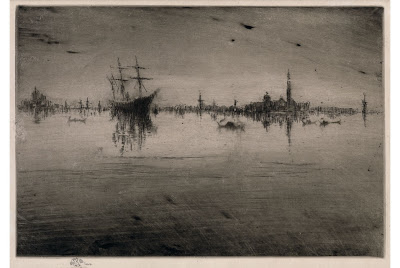 J.M. Whistler
etching and drypoint
In America, the tendency of the Tonalist artists to pursue intimate corners of nature continued in etching subjects of the day. When searching online, I found this wonderful etching by the artist Ellen Oakford. It was made around 1887 and exhibited at the New York Etching Club around 1888. So far, I have found very little information or work by Ms. Oakford. Apparently, she was one of a group of women etchers active during this time. But, this lyrical mysterious etching confirms that I am following in the right footsteps. 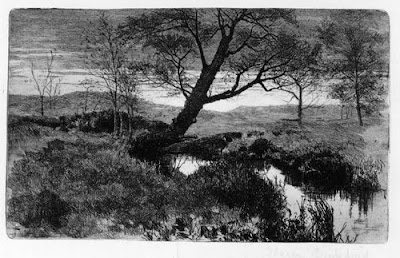 Wonderful, thanks for posting these.