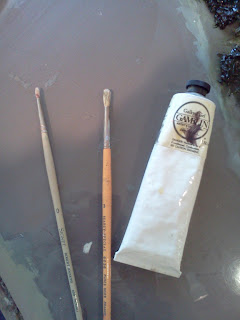 Every once in awhile, it's good to ask yourself why you do what you do. Here is an example. The other day I started thinking about why I use brights. When I first started painting again about 20 (!) years ago I used filberts because the artist I was studying with did. Eventually I switched to brights- tried flats briefly but they were too floppy for me, and I liked the square touch I got with a bright. Of course, I was painting in a direct, alla prima way at that time.

Fast forward to five or six years ago when I began exploring indirect techniques. My brush obsessions became about finding out what worked best for glazing (sable watercolor wash brushes) and for the drybrush transparent underpaintings I do (beat up versions of the aforementioned brushes).

Bristle brushes, at least the brights I was using, did not work well for the translucent and opaque passages that I layered on top of glaze layers and the scumbles I used in my skies and for forms in the distance. So, I used the sables and more recently some mongoose brushes made by Rosemary. But still, they were brights.

One of the challenges of the technique I use is to "marry" the transparent passages with those other ones- translucent, opaque, scumbles, drybush, etc. A heavy handed application will look out of place- like it should be on someone else's painting. And, worst, of all, it will destroy the atmosphere and mystery I work so hard to achieve. So I tended to keep those passages thin, which also tended to level the paint quite a bit. I use Liquin as a medium and it is a wonder for glazing- increases transparency and flow and in doing so-levels the paint. Even used sparingly, it still tends to bulldoze a brushstroke.

So, for no particular reason except I have been rattling these issues around in my head now for years, the other day I pulled out a couple of well worn rounds which belong to my husband and a tube of Galkyd Gel which I experimented with in direct painting about 10 years ago. And this is what happened. (click for a closer look). 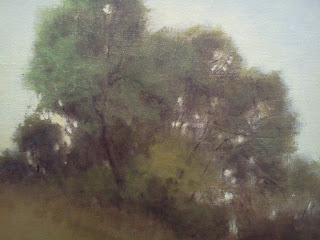 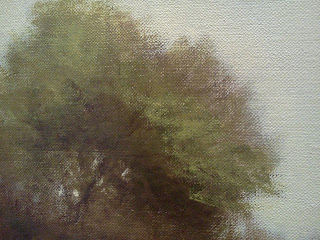 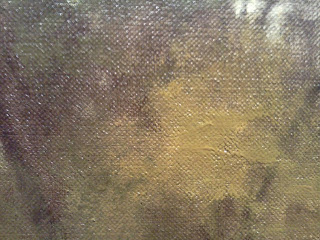 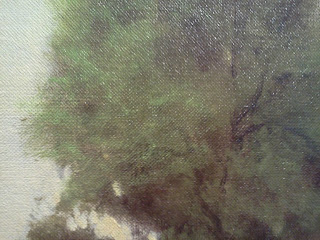 The Galkyd Gel tube says it increases transparency and creates impasto. I thought upon reading that- "yea, right". Well, it does! Somehow, it combines high viscosity (no flow) with transparency to create a glaze impasto! Which means those particles of opaque-ish paint are suspended in a glaze like stroke- so it looks like it belongs with the rest of my painting. And the rounds were stiff enough to create a brushstroke, but gave me a freer, less angular paint application that suits my work perfectly.

I tell my students that it is important to make time for R&D (research and development) to explore new ideas and techniques. I guess I need to take my own advice.

Now, that's some nice painting! Galkyd Gel is now added to the list of things I'll look for when I take a trip to the big city in a few weeks. Thanks for the tip.

Hi Deborah, what an interesting post. Just when you think you are comfortable with your materials and equipment, then the ‘what ifs’ throw you a curve ball (lol).
I love reading about techniques and materials so this has made my day.
Can you use Liquin on the same painting as the Galkyd Gel? I was looking at some of the under paintings and paintings I did as part of one of your classes just yesterday…trying to figure out what I had done and what you had said. I still can’t find or make a panel that I am totally happy with…. there is just so much more choice of different products in the States…. that is one thing I miss about being back in the UK.

Very interesting. It's so funny how we all have our favorites, brushes, paints, mediums. The magic happens when we find the right match for ourselves. Keep having fun and listening to your own advice.

Don't you just love those eureka moments. Most of the gels or marogers medium are good at fuzing wet and dry passages. Often I think someone can tell you how something works is not as important as discovering it on your own.

Thanks everyone for your comments!
Maggie, both are alkyd based mediums so I think it is fine, but Galkyd Gel has some pretty specific suggestions for the percentage of paint to medium, so you should bear that in mind.

Jim, I like the definitions you have posted on your blog for indirect techniques. When I set out on this journey, I struggled to get a handle on the terminology and specific differences in techniques. I think your description of velatura is perhaps the best one I have seen.

Thought about using Galkyd Gel at one time but I never followed through. This time I will check it out!

It is rewarding for me to watch the mystery of your paintings and style being told.

I love the passage of thicker paint your new bff gives you. Lovely. I'm pulling the gel out of my cupboard today. I think I bought it the same day I first bought liquin, thinking to try a variety of mediums.

Great post Deborah! Thank you for sharing your discovery. I will definitely have to try some!

I've come back and read this a number of times now, Deborah - fascinating and very helpful. I'll give the Galkyd Gel a try. As you say here, getting transparent passages to work well with opaque and semi-opaque parts of a painting is challenging and certainly something I've struggled with in learning indirect techniques with you. Beautiful painting, too! I've been studying the color here just as much as the technique.