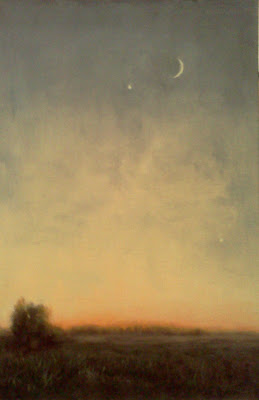 Moon Attended by Jupiter & Venus
15 x 10
A few weeks ago Steve and I were driving to a nearby small town for a concert. It was my favorite time of day and as we drove the sun slid out of sight and the glow just above the horizon transitioned into the night sky above. I noticed that in the western sky the crescent moon was accompanied by a bright star quite near it. Venus hovered just above the horizon.
Later I did a little research and found that this month the "classical planets" - those that can be seen with the naked eye- are all visible in the night skies at this time. So, this is Jupiter and Venus, attending the moon as she begins her descent. Mercury is also visible in the southwestern sky this month and look for Mars and Saturn in the eastern sky.
I painted this little painting from memory this week.
Posted by Deborah Paris at Saturday, March 10, 2012

You make me want to be a landscape painter. If only.

Maybe a "little painting," but the idea is big.

Well, Debbie, you can be! See you in a few weeks!

Great excitement here, Richard, Angus the cat and I all dashed out to see the most incredible sky that showed a world full of stars. We saw Venus, Jupitar and Mars there would have been others there too but our village had too many lights on to really be able to see everything so perfectly. Venus and Jupitar were so bright and clear. I told the guys ' look it's Deborah Paris's planets from her beautiful painting'!