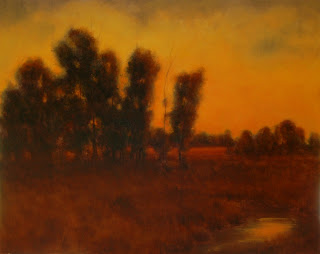 Here 's one of several larger pieces I have been working on over the last few weeks. The gallery asked me to do a "pair" of paintings- which I have never really tried to do before. The idea is that these two pieces would be somewhat similar, complement one another and be framed the same- they could be sold as a pair or individually. Sounds simple, right? Well, it turned out to be much more difficult than I anticipated. Unlike a diptych where the same composition flows from one canvas to the other, these images needed to be separate and distinct, yet enough alike to "hang together". I decided to use generally the same point of view and thus horizon line to help hold the two images together, as well as similar color harmonies. The second piece is not quite finished but I'll post it in a few days.
Posted by Deborah Paris at Saturday, May 17, 2008

Another knockout Deborah. I would love to be able to see your show and see this in person. Great delicate use of detail and color.

Your work is so beautiful, Deborah. I love the light and moody color in this one.

Thanks Cooper and Dar! I really enjoyed working a little larger on these two.