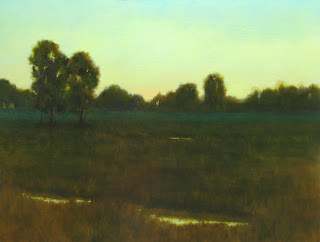 For the last two years I have been running after pictures, and seeking the truth at second hand. I have not endeavoured to represent nature with the same elevation of mind with which I set out, but have rather tried to make my performances look like the work of other men…There is room enough for a natural painter. The great vice of the present day is bravura, an attempt to do something beyond the truth.
John Constable
As readers of this blog may know, I count J.M.W. Turner, the great 19th century English landscape painter, as one of the influences on my work. Turner and John Constable have come down to us in art history as the twin stars of early 19th century landscape. And though Constable has always had my admiration, it has only been in the last year that I have come to feel a deep kinship with his art and aesthetic point of view.

In art history, Turner plays the shooting star to what seems at first glance to be a more earthbound Constable. And in fact, Turner did burst on the London art scene, becoming the youngest member ever elected to the Royal Academy at age 24 , while it took Constable over twenty years to achieve that status. Both exhibited artistic courage by raising the art of landscape from its third class status and laid the groundwork for the Barbizon School and the Impressionists. Turner's emphasis was on the Sublime and his audacious use of color and technique nevertheless were often used in service of history or classical themes which found more favor at the Royal Academy than the pure landscape paintings of Constable.

Constable's art was based upon a deep and abiding affection for the landscape in which he grew up and to which he returned during his entire life as a source of inspiration, saying that for him "painting was but another word for feeling" and that his art "could be found under every hedge and down every lane". Constable's approach to his art, grounded upon plein air work and close observation, combined with painterly technique was in fact, quietly revolutionary.

At a time when representational landscape painting is once again beneath consideration, if not contempt by the post modern art world (today's self protective gatekeepers as surely as the Academy was in its day), I take great comfort in Constable.

I should paint my own places best, for they made me a painter.
John Constable
Posted by Deborah Paris at Friday, September 26, 2008

That was an interesting post Deborah especially the quotations from Constable - not to copy "the work of other men" and to paint your own places for those are the ones you know best. Your painting by the way has translated well into the big format. I love the streak of dark blue green (is it cobalt green?) beneath the tree line. Would be nice to see it in person though as I'd like to get up close to it!

Hi Sheila- thanks-I was concerned that the composition might be too spare to work in the larger format but I am pleased with how it turned out. The challenge was to use the shifts in color temperature (rather than value) to describe the recession in space. The cooler green in the back is viridian (knocked back a bit). I wish you could see it in real life too!

Deborah, As always, your work looks great. This latest is no exception!
Thanks for your kind note regarding our latest addition. We're doing well over here. How are things with you?
Best wishes friend,
Cooper

Deborah, Thanks for the reminder of the role these greatest artists played (and continue to play in their influence). Wonderful thoughts.

Love the painting, too, and again (as Sheila) I was drawn to that blue/green line, which I assume is a layer of fog/moisture. Beautiful in its simplicity!

Love the pic!
I spent a lot of time checking out many small Constable oil sketches done on location when I'd be at the V&A or the Tate in London during my twenties.
I always liked his studies better than his finished works.

You have such a great blog I have given you a Brilliante Blog award for 2008. Just love your work. Please visit my blog to collect your award,
Steve.

Good points re: gate keepers and the Academy. I never thought of that before.

Hi Cooper- glad to hear life with little Luca is going well- thanks for visiting!

Hi Ed- I find that there is so much to be learned from the lessons of the artists that went before. I'm glad you enjoyed it.

Thanks Steve- love those critters as always!


Hi Casey- glad you like the banner. I decided after a year it was time to spruce up the blog a bit!