The Summer of Santa Fe

In the summer of 2001 Steve and I rented a house in Santa Fe. Although we had been spending a few months a year in northern New Mexico since 1998, this was the first time we spent much time in Santa Fe. The old adobe house was located a block off Canyon Road and had a beautiful walled garden. We settled in and started to make friends, entertain, explore and generally have a lovely time. It was also the summer I painted this little pastel. It turned out to be a breakthrough piece in a number of ways. It won some awards and ended up being published in several magazines and a book. As a result of that, I received some attention from galleries and eventually had feature articles in American Artist and The Pastel Journal, and an"Artist to Watch" in Southwest Art Magazine. 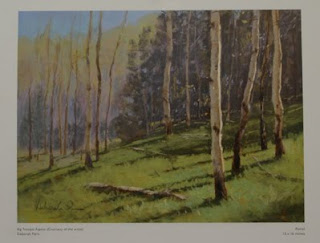 So, in addition to enjoying an idyllic couple of months, I made some big progress in my work that summer- both at the easel and in my career. We were blissfully and mercifully ignorant of the events that were about to over take us over the next months and years- 9/11, the deaths of my parents, Steve's heart surgery, and the financial hardships that brought. That summer, all seemed right with the world.

Last year, I was contacted by New Mexico Magazine - they wanted to use an image of Big Tesuque Aspens in their 2010 calendar. This week my complementary copies arrived. We have moved on, as has my work, but it was a nice reminder of the Summer of Santa Fe. 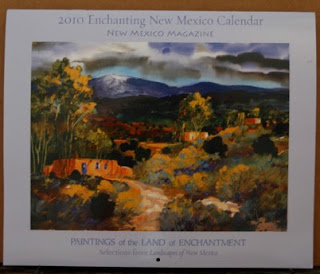 the aspen painting is beautifully handled: the perspective, the light. and congratulations on the calender, a wonderful choice of painting. r.

Thanks so much, Deborah for a glimpse of your 'story'. I have long felt that behind every great artist is a story of some kind of tough circumstance that somehow weaves its way into their paintings. Your challenges around 9/11 coincided with mine in terms of calendar timing. We lost our 14 year old daughter when a fire roared through our new house on xmas morning in 2001. I'm still working on my weaving and only hope to get a magazine interested in my work!
ps: I enjoyed your tonalist teaching!

My husband I am were discussing this shift after 2001 in our own lives only this morning over coffee. It seems there were things we just knew and took for granted then, such as good jobs and hard work bring stability. This isn't true any longer. The hurdles are higher, the demands greater and the time less.

I'm struggling to wrestle time away from my 14-year role as Mom, paralegal to focus on painting and mentorship into which I've been fortunate to be accepted. Success takes so much more now--I'm going to have to find a way to restructure and focus!

Your work, blog and insights are an inspiration. Thanks so much.

That's great. I like how stuff floating around from ages ago can pop up again and surprise you (in a good way).
Meridee and I are both glad you two were in Santa Fe (even if you lived in Placitas) when we moved here.

Vicki, I am so sorry to hear of your loss. I do agree with you that our trials and losses add a texture and depth to our work.

Thank you Tess- and good luck with that mentorship program!

Beautiful pastel. Nice to see an early piece from you, interesting. Sounds like you had a lot to deal with. Still going strong, sounds like. Brava!

I saw your paintings. I must say you are a very talented person. I’m very moved with the way you see things around you and painted it, very beautiful.