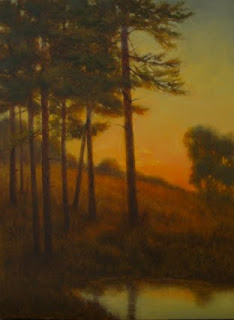 The first time Steve and I visited New Mexico was in the fall of 1998. I had wanted to go for a long time. My first teacher and mentor, Ned Jacob, had lived in New Mexico in his early years as an artist and his stories loomed large in my imagination about how it might be to live a life as a full time artist. We decided to visit Taos, where so many writers and artists in the early 20th century had been lured by the quality of the light, a magnificent landscape and an exotic mix of cultures. The rest is history- we spent a number of years in New Mexico part time and over five years there full time.

This September we will be back in Taos for my workshop. As luck would have it, the Plein Air Painters of New Mexico (PAPNM) are having their Juried Exhibition at the Millicent Rogers Museum in Taos at the same time - opening on September 17th. In 2004 I founded Plein Air New Mexico- now PAPNM- which grew to over two hundred members over the next few years. One of the goals I set for the group when I started it was to have an exhibition at a museum. Since my departure in 2007, the group has continued to grow and last year held its first show with a museum venue. So, it is a great pleasure to see this come to fruition, and an honor to be asked to be the Judge of Awards for the show.

September in Taos is spectacular. Changing aspens and cottonwoods, blooming chamisa and wonderful weather make it a perfect time of year to visit. There are still a few spots left in the workshop- details are at the link at the top of the sidebar.

Beautiful painting Deborah I love the reflection of the tree in the pond. The painting has such peace and a feeling of stillness in the evening light. It must be so difficult to judge and give prizes, yet it will be an exciting time too. Have a great trip.

Congratulations, Deborah! It must be very satisfying and thrilling to have your dreams and hard work finally come to fruition!

Yes, Linda it is a big thrill. Looking forward to it!