This is a painting I have had on the easel since early this year. It is the first of the larger works I am completing for my Lennox Woods solo show in 2014. At 48 x 64 it is the smallest of the six or seven large paintings I have planned to anchor the 50 piece exhibition. I completed the underpainting on this one early in the spring, but other things kept me from making any more progress on it until recently.

All of these images can be clicked for a larger view.

This is one of the value studies I did when working out the idea of the piece. This is graphite. At this point I am working out the design in the proportion I plan to use for the large canvas. 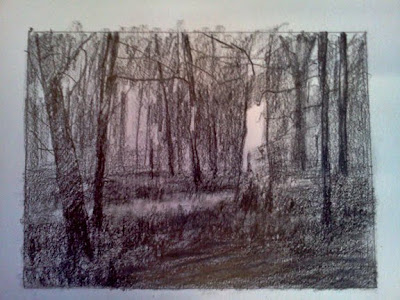 After deciding on a design, I did a monochromatic study in oil (again using the same proportion, 3:4)  Not a great image, a little glare. 18 x 24 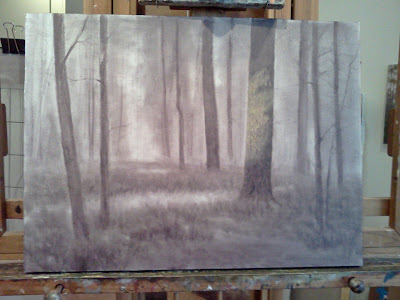 Here is a grid on tracing paper. I laid the tracing paper over the oil study and drew a simple grid. This gave me some measuring points for placing the horizon and main forms on the larger canvas. I didn't draw a grid on the larger canvas because I really didn't need it but also because parts of my canvas will remain transparent in the final piece and I didn't want the grid to show. So, I just used the distances indicated by the grid (each 3" square would translate to a 8" square on the larger canvas) eyeballed it and measured using the proportions from the smaller study. 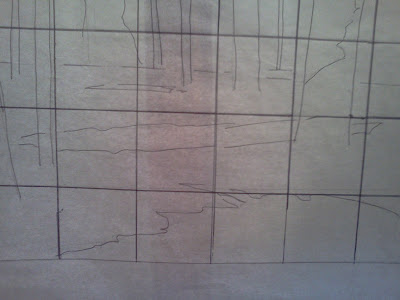 Here are the grid and the study on the easel next to the larger canvas. 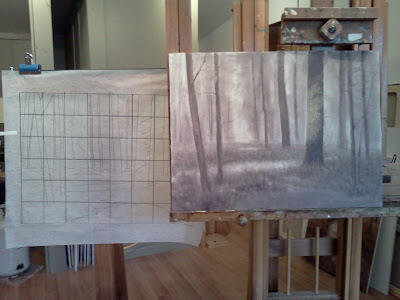 Here is one days work on the larger canvas. 48 x 64. I lightly indicated where the horizon line was, the main tree shapes. Then I started using a wipe out method in the background using transparent paint (Vasari Shale) which was applied with a rag. The trunks will eventually be darker but at this stage I just wanted to get the placement organized. I started on the dry brush in the foreground before I stopped for the day. The toned triangular area in the foreground will eventually be covered with some opaque paint, then glazed (suggestions of leaf litter and forest floor clutter). 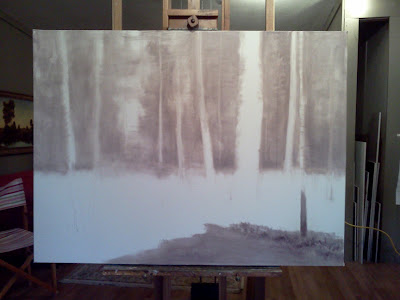 Unfortunately, I forgot to photograph the progress on the underpainting, but here it is completed. At this point I was beginning to change the direction of the light. Initially I had planned to have the light coming from the left and illuminating the main tree trunk. While I was working on the underpainting, I decided to change that plan and create a softer backlit scene. I also decided I wanted to open up the woods a bit more, creating more distance between the trees in the foreground and the trees in the distance. The underpainting is really the last opportunity to make those sorts of changes so I take my time and try to pay attention rather than just slavishly following my studies. 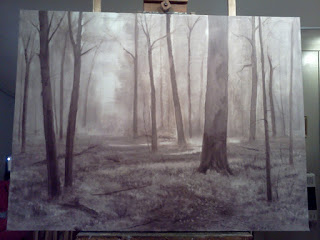 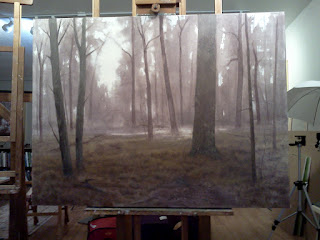 A detail of the near trees on the left side. These are American Hornbeams which abound in Lennox Woods. They have a distinctive fluted sort of trunk and are part of the understory trees throughout the Woods. This is just a first layer of paint. Many more to come. 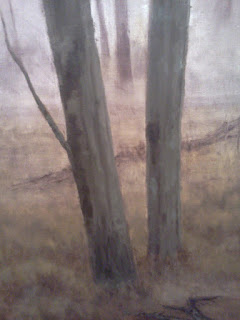 Here is a detail of the sky and distant trees. 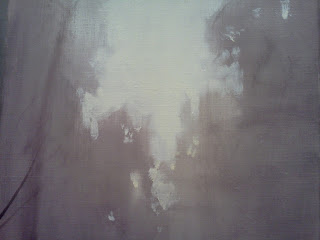 A detail of the main tree trunk, a white oak, in the foreground. Again, just the first layer of paint. 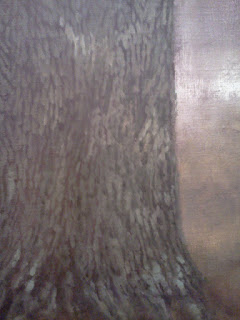 This is the foreground area depicting the forest duff- which is sometimes several feet deep in Lennox Woods! 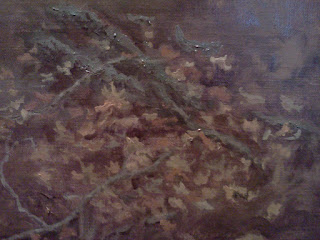 I hope to have this piece finished by year end. Stay tuned!
Posted by Deborah Paris at Sunday, September 30, 2012

I am stunned by the beauty of that graphite piece, and see the whole thing coming together in the final painting. My compliments!

Thank you so much for sharing these progress photos, the work has a magical beauty. I look forward to seeing more.

Thank you Casey. You know I love to draw!

What a great scale to work in. Wonderful to see the steps involved, looking forward to seeing how it goes - beautiful so far!

I really enjoy your work and appreciate you sharing your process.
Could you tell us what the source is for the painting? Photos? Computer?

Hi Joel. My work is based on observation of nature and field studies, both drawing and painting. The field studies are then used, along with memory , as the basis for work in the studio. Thanks for your interest!