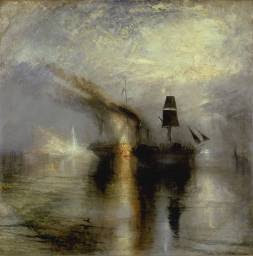 This is the second post on my visit to the exhibition J.M.W. Turner at the Dallas Museum of Art. You can read the first post here.

As I mentioned in my first post, I always feel a bit like I am entering a shrine when I go to an exhibition of this sort. Both as an artist and a lover of art (and those can be two completely different things) being in the presence of the work of an artist I admire and revere is a humbling and reverent experience. In Turner's case, it is perhaps doubly so because his work has had a profound and transformative influence on the art of landscape itself and on the work of so many artists including me.

It is not exaggeration to say that Turner, along with his contemporary John Constable, charted the course of landscape art from a backwater, second class genre to the towering achievement of late nineteenth century art, Impressionism. Turner has been called the first impressionist but I think that is a simplistic, linear way of looking at what he achieved. What he set out to do and did was to express the idea of light, air and atmosphere in his paintings. 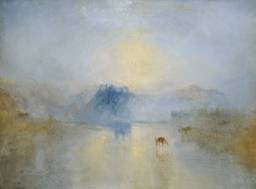 When Turner turned to oil painting he came to the medium as an accomplished watercolorist. His early works were completed in a traditional way on a dark toned ground and worked up with a fairly well developed under painting followed by opaque touches and some glazing to bring the whole to completion. As his career progressed, partly because of his watercolor background and partly because of his fascination with Venetian painting techniques, he began to experiment with the use of light colored grounds which would be more reflective and create luminosity, especially when used in concert with glazing. Turner was avidly interested in the new pigments which were becoming available, particularly in yellow and whites, which he believed were necessary to express light in his pictures. He often used a mixed media approach, using both oil and watercolor in the same painting. His experimentation has unfortunately led to some of his paintings being in extremely poor condition - even during his own lifetime. 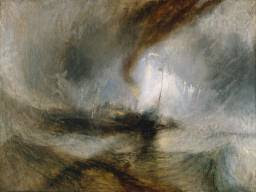 His quest to portray light and atmosphere also resulted in the forms in his paintings becoming less substantial, often dissolving into or emerging from the light through veils of translucent color. Contemporary accounts of his painting methods indicate that he relied heavily both on glazing and scumbling to achieve these effects. The result are works which appear startlingly modern. Subject matter was essential to Turner but light and color became the most important formal concerns of his art. In that way, he seems to actually leap frog over the Impressionists into modernity - toward Helen Frankenthaler and Rothko.

But Turner most certainly loved the landscape and his devotion to its many facets comes through in these works. He used light and color to describe the idea of the Sublime with which he believed the natural world to be imbued. It is that, for me, which gives these works power and timelessness.
Posted by Deborah Paris at Tuesday, March 18, 2008

Still reading this. Thanks for exposing more @ Turner, Deborah.

We were in the National Gallery on Saturday - and had a bit of a moan about one of the Turners having gone walkies - I see it's gone to Dallas!

Thanks for visiting Casey.


Hi Katherine. Yes, there are quite a few here (140!) and its such a treat.. The show moves to the Met in May, so I am hoping to see it at least one more time. Thanks for visiting!