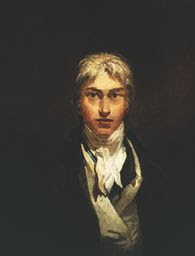 As I mentioned in my previous post, this last Sunday I traveled to Dallas to do a demo and talk for the Pastel Society of the Southwest. Luckily for me, I was able to spend about a half a day at the Dallas Museum of Art which is hosting the exhibit J.M.W. Turner. This exhibit, which was selected by curators of the National Gallery in Washington, the Dallas Museum of Art and the Metropolitan Museum in New York in collaboration with Ian Warrell of Tate Britain, is billed as the largest and most comprehensive retrospective of Turner's work ever presented in the United States. The paintings are beautifully hung in large galleries- dimly lit, with rich jewel tones on the walls- which show the 140 works to great dramatic effect. For me, it was like visiting a shrine. 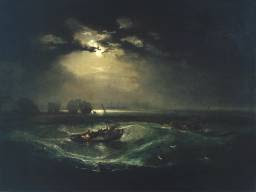 J.M.W. Turner (1775-1851) is acknowledged as one of the greatest landscape painters in the history of art. Turner's impact on the art of landscape began early in his own lifetime and has pretty much continued unabated to the present day. When he began his life as a professional artist, landscape was considered a second class genre of painting, important only as a backdrop for historical and classical scenes. By the time of his death, he had transformed landscape painting into a vibrant, modern subject for artists who followed him.

The exhibition is organized chronologically, beginning with early watercolors and ending with Turner's late, almost abstract works. Turner's original medium was watercolor but he soon began painting in oil as well. Oil was the only medium which would provide entrance into membership of the prestigious Royal Academy. The painting above, Fisherman at Sea, was the first oil painting Turner exhibited at the Royal Academy. Eventually, he became the youngest artist to ever be elected to full membership. This subject of ships and storms at sea was one he would return to throughout his entire life. 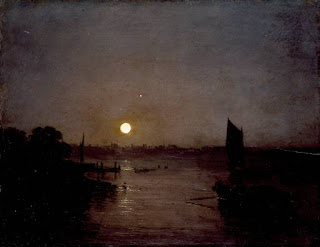 The exhibition follows Turner's career and includes huge oils that are fine and famous examples of other subjects which he returned to over many decades- Venice, contemporary events like the Battle of Trafalgar, whaling, sailing regattas, and views from his numerous travels throughout Europe. Many of the larger paintings are shown with watercolor sketches which were done as studies for the larger works and show the development of his visual ideas. One of the most effective presentations is the gallery containing two oil paintings which Turner painted of the fires that consumed the Houses of Parliament on October 16, 1834. 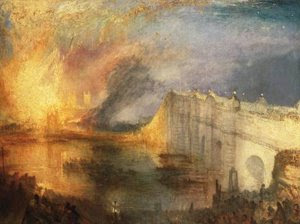 Turner actually witnessed this event and returned to his studio to produce the watercolor sketches which are displayed with the two oils. These watercolors are among the most beautiful I have ever seen- dramatic spare compositions with almost abstract shapes of luminous color.

Turner's art was in large part dedicated to the idea of the Sublime - a concept which had been around since antiquity, but enjoyed a particular resurgence in the eighteenth and early 19th century. The Sublime as applied to landscape was the idea that certain views or scenes, whether grand, vast, even horrible or terrifying, could evoke feelings of rapture, closeness to divinity, and expansion of the mind. The Romantic sensibility of Turner's time embraced the idea of the Sublime. Turner came to understand that in order to capture it, he must find ways to paint which sensuously presented light, air and atmosphere rather than detail. In my next post, I'll write about those technical aspects of Turner's art and how he revolutionized the art of landscape painting.
Posted by Deborah Paris at Tuesday, March 11, 2008

Dicovered your blog this eveining. I really like youe style...Almost Mononchomatic...very strong tonally which is somthing I aspire to! & a great demo about process! Ive added you to my favorites! Im looking forward to going through your archives! Cheers,

Hi Ed. Enjoyed seeing the work on your blog- lovely drawings.Thanks very much for visiting!

I have a new understanding of Turner, now. Thanks much.

I passed up the new route through Wyoming last year. Good on you for doing this @ your Texas trip, and finding new subjects.

Hi Casey. It never ceases to amaze me how so much of "what came next" was influenced by Turner- impressionism, the Hudson River School, tonalism and even abstraction and color field.
The next post will be about his technical innovations.
Thanks for visiting!

I've recently discovered Turner and will be going to the exhibit at the Met in a couple of weeks.
Can you recommend any sources for good quality posters or reproductions of his work?

Thanks for maintaining this website. I look forward to exploring your work as well.