A Member of the Tribe 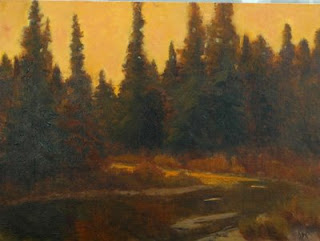 Ever since Seth Godin published his book, there's been a lot of talk about tribes- how to build them, lead them, market and sell to them. But, whenever I hear that word, I can't help thinking about the first time I heard it applied to artists.

In June of 1992 I took a workshop with Ned Jacob in Maine. I had only recently started painting again after a long hiatus and pursuit of another career, in which I was still fully engaged. I didn't know who Ned was- didn't know that he was practically a legend to representational painters (particularly in the West) and that he was revered as a master draughtsman, painter and teacher. I just knew that I liked the description of the class in the brochure I received and that the dates fit in with the week of vacation I had coming.

The workshop was held at a summer place with an inn and cottages near Rockport. It had a small building that was used as a studio. Everyone stayed on site and meals where taken together-family style. Although the class was billed as a landscape workshop, it soon burst out of those narrow confines into something much bigger and quite magical. Ned loves the figure and soon found a model, so we painted outdoors all day, then did life drawing in the evenings after dinner, looked at thousand of slides of paintings by artists like Sorolla and Levitan, and talked endlessly about art. It was pure heaven.

One morning we were painting at the harbor in town. Ned was in the middle of a demo and we had all learned by that time he expected quiet, rapt attention when he painted. As we stood around in hushed reverence, a woman came over and started talking to him-chatting away about the fact that she too was a painter. When she left, another student made a remark about the intrusion. Ned looked up and smiled and said "its ok- she's a member of the tribe". And, then he explained his idea that all artists were members of a tribe- one that spanned both space and time - a tribe that included the cave painters, Rembrandt, and even me.

That week changed the course of my life- or perhaps more accurately- rerouted it to its original heading. I understood what I was meant to do and that I was indeed a member of the tribe.
Posted by Deborah Paris at Wednesday, January 28, 2009

Deborah, thank you for eloquently expressing what I was trying to explain in a comment on Linda Blondheim's recent post.
It's a huge concept and I love it.

thanks for sharing your story about the word tribe...it's a good tag for all of us who seek that elusive goal.

OK! I definately have to tweet about your, as Nancy stated, "eloquent" post on the tribe. Yes Twilight Rise is beautiful!

Very interesting read(as always!!!). This is the first time I am coming in contact with the word "tribe" with regards to artists. It makes perfect sense too.

I truly admire the depth in each of your works.

Hi Nancy-you're right. It is huge and so much more powerful than the way that word is being used today I think.

Hi Painterchum-I'm glad you enjoyed the post and thanks for visiting!

Hello Nkolika. Thank you for your kind words about my work.

Thanks for this post. I find it very encouraging and inspiring. I also love the painting.

Glad to be part of your virtual tribe. Another knockout Deborah!