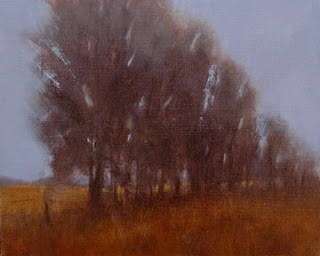 ”… in all nature, for instance in trees, I see expression and soul… ”
Vincent van Gogh, letter to Theo van Gogh, 5 November 1882

I spent some time this weekend preparing for a demo/talk I am giving tomorrow night at the Sherman (TX) Art League. This is the first time I've really demonstrated the indirect painting method I now use. Because that process doesn't really lend itself to a two hour demonstration, I did an underpainting which should be dry and ready to work on by the demo. I'll do a small underpainting to show the drybrush technique I use, and then work on the completed one to show how the glazes are applied. I also wanted to be prepared to talk about my work- what I paint and why- which, of course, is much more difficult than talking about technique. Recently I rewrote my artist statement. To be honest, I've always had a bad attitude about artist statements- perhaps because I've read so many that are totally incomprehensible and pretentious. The work should speak for itself and if it can't, writing an artist statement won't help. That said, the process of rewriting mine was more clarifying than I expected. For a short piece like that, I tend to write, edit as I go, and move on- a habit from my previous life I guess. This time, I went back to it over several days, looking at each sentence to determine how to clarify it, make it leaner, or whether it should be left out altogether. It ended up being about the same length but the focus changed considerably. I included much more about what I paint and why, than about how I paint it. Which is, as it turns out, what interests me most.

Postscript: This morning I had a half dozen emails from people asking me to share my artist statement. I had intended to post it here last night, but just as I was about to cut and paste, I realized I wanted to edit it again- just a bit- before going public with it. So, I apologize for the abrupt end to the post- I'll be back soon with the results of my labors.
Posted by Deborah Paris at Sunday, January 18, 2009

Can we see your lean artist statement?

Hi Robin. Sorry about that- see the postscript to my post added this morning. Coming Soon!

I look forward to your new statement.

I wanted to link this post, today, Deborah, but it looks like you didn't fill in the title which creates the link. May I share this link with my tree class post next time?

Just added a title, Casey. thanks!

I have been remiss about commenting but have appreciated your recent posts — especially the one about where the painter, or viewer, stands in relation to the landscape.

I love the composition and perspective of the trees in this painting; also the way the top of the front tree's foliage is fuzzed out.

And I am so glad you wrote what you did about your attitude towards artist statements. ME, TOO!! I'm also in the midst of having to write one up as well, although in the midst puts me farther along than I actually am.

It's great that you're happy with the result. Enjoy your demo.

Hi Deborah, really like this one not sure exactly why, maybe its the strength and simplicity of the forms, or maybe the sense of enclosure hinted at,but still with open space.

Hi Suzanne- I am always happy to hear from you! I'll be writing a bit more on the dreaded artist statement soon.

Hi Simon. I'm glad you like it-whatever the reason! I saw some interesting edges of fields on the drive to and from my demo, so stay tuned for that.