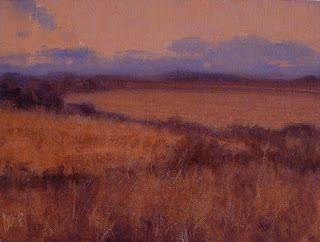 I'm feeling on the edge about my work at the moment- a feeling that something's afoot. This happens every so often. For the first ten years or so after I started painting again, it would happen about every six months- what seemed like a huge leap forward, mostly in technique. Then, as time went on, the shifts became more incremental, less dramatic- more about refinement of both technique and aesthetics. Or, so I thought. Then about two years ago, there was a major realignment- an 8 on my personal Richter scale. I stopped working in pastel (which had been my primary medium up until then) and started working exclusively in oil in an indirect way, rather than the alla prima method I had been trained in. At the same time, I really honed down some of the aesthetic choices I was making about what I paint and why- a direction I had been moving in for several years. Looking back, I realize that there were lots of little tremors and small quakes over the years preceding all those changes. My husband is actually more sensitive to all of this than I am. So, last week when he said "something's happening", I listened. And, I think he's right.
Posted by Deborah Paris at Saturday, January 31, 2009

hi Deborah,
it's a bit exciting on the edge, no? definately where one wants to be for growth.

My husband always lets me know when I am changing too. Good thing, cause I tend to miss a lot of it:) I love this painting.

How exciting! I can't wait to see what comes of it.

Thank you Tracy. Its good to have them around, I guess!..:)

We'll see Katherine- sometimes it takes a while.

on the edge is the most exciting place to be creatively cause we know we are moving into new territory, as yet undiscovered and unspoken by the creator. I read a quote the other day,
"One is never tired of painting, because you have to set down not what you knew already, but what you have just discovered."

Hm Deborah, exactly the same thing I wanted to tell you already last week. There is a shift in your work suddenly, different colours, a different light. I think it is always like this - the one who stands outside the work will realize it first - the one who is inside the work is mostly the last one to notice because we are much too involved. But that's okay too.
And it is exciting!
I am very curious to see what comes in future from your easel!

Think about a staircase: every step starts with an edge. It means growth, but I also hear your uncertainty. I often feel the same way, always questioning my direction, motives and results. But in the end, these are answers only you-- the artist--can answer. Even though we support each other greatly in our artistic journey through blogs, Facebook and the like, in the end it's a solitary road, where the journey is the reward.

That's very interesting Deborah. It is almost like the work is leading the way. Remember how we talked once about 'planning'? And yet there is something called 'intuition'. Do you think this is what is happening here? I think this latest painting is rather different and quite emotional. I really like it.

Deborah, I just realised that "Zig Zag" is from 2007 and therefore not a recent painting. How strange, but there is something adventurous and exciting about it.I think it invites one in to it in a seductive kind of way. Why did you choose this one as your painting today?

Hi Holly. Yes, one of the reason I am passionate about painting is that its a never ending learning experience.

So true, Ed, you never arrive- its all about the journey!

That's interesting Petra! Which painting(s) did you feel that way about?

Hi Sheila. My choice of Zigzag was random (I think) but it does have a different look than some of my more recent things. I still think a lot about that intersection of the emotional and intellectual in painting.

Hello Deborah
Much going on there, and I sence that in your writing. It is good that you are able to recognise and put down on paper your thoughts.
Best Wishes

Hi Deborah, I love the muted tones in your work. Your paintings are gentle, yet profound. I'll be following.

How exciting it must be to feel the next stage of development coming on!

Very insightful thoughts, Deborah, and have loved reading others' comments. I always love coming to your wonderful blog. My wife serves as your husband does, the voice of truth over my shoulder.

Hi Deborah! I'm a newcomer to the blog. Beautiful work! I'm looking forward to visiting from here on in.

Thank you Blair- what a generous description of my work!

Hi Bill- yes, our spouses do help keep us on track!

This is very beautiful, as is all your work. I'm a big fan of quiet, serene paintings.